Questions directly relating to you

How did you come up with your band name? Does it have a background?

Yes,  Skassapunka is a joke- word , taken by an italian word, cassapanca, that means  chest, and it's a word that include ska and punk

How would you specify your style as a ska band?

We have our style mixing european-balkan ska-punk and  two tone too, 2tone-punk!

Which song would you suggest someone to listen to in order to get to know your music best?

CRAZY TOWN or RUDES AGAINST because i think they represent our style better than other , we also have PAGHERETE CARO, a little bit more punk but in SKASSAPUNKA STYLE

Which ska band/personality influenced you the most?

SKA-P and PUNKREAS more thank other but there are a lot of wonderful ska band that influenced us while we were growing and also now.

Apart from ska, what music style influenced you the most?

What message are you trying to get across to people with your music?

We wanto to comunicate  first of all the power of the music, it's an important way to get some  social and political message to the people; we are from working class and so we are for working class, for a more equilibrated economy for class fighting, sure we want to send  message against capitalism and for a different world based on human beings and not on  money.

Does ska have a political meaning for you, and if so what is it?

It's a very representative kind of music for antiracism, antifascism and anticapitalism movement, for this reason we got closer to the ska as boys yet.

What were the best and worst venues you've played?

It's a difficult answer!! There are a lot of wonderful places where we've played, we really like the park and the stage of FIGHT BACK FESTIVAL in Nurenberg! Also for the sense and the values of the festival; about worst place…. At star in 2009 we've played for a benefit near Milan in an abandoned  factory, whitout people, whitout some stuff (like microphons…) very punk!

How would you describe your audience?

People that wanto to have fun but also live with us the power of the message that we all together share.

Which song do you usually play as an encore? 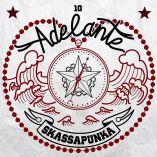 Have you got any weird touring experiences worth a mention?

We have a "fun" story. Last year we had to play as headliner in a wonderful festival  in Brienz (CH),  We left Milan, and after 3 hours of travel we arrived in Brienz; but we discovered that there are two Brienz in Swiss… So we were in the wrong place, and the right Brienz is three hours far from the city we were, so we took the van and drove very fast.

Which band would you most like to play with?

There's a lot of talk about 3 ska waves. How far can you identify yourselves with those? What do you think is going to come after the 3rd wave? What's the future of ska?

I don't know in which waves of ska we can identify ourselves (I think we are in a distortion and punk wave of ska) but sure every period give to us important brick to create oour background, and to answer to other questions ska is a kind of music able to upgrade itselves, so sure there are different waves but we are shipping in this wondergul sea and we are sure that there will be other wave cause the time changing, it's normal, only for different sounds.

Why do you think it is that most young bands either play traditional ska or ska-punk?

Because there a lot of new generation that love this kind of music, and it's a music that needs a lot of energy, so you know the age doesn't exist in this world. All skankers are young!

Why do you think it's so difficult for ska to establish itself? Do you think ska is doomed to continue to play a minor role in the music scene?

I'm not sure it's so difficult, I don't know (cause we choose this street) if there are easier street for other kinds of music, sure i know that there is a big problem of culture ( in Italy more than in Germany) and big Label are lookiing only for money interesting, this is the cause of all problems in this world and for music too. Ska has a minor role, but it always has a role.

Which band or ska CD do you recommend (apart from your own) to the people out there?

Who, in your eyes is the "Godfather of Ska"?

Which ska site do you particularly recommend? What are your favourites?

In italy there is a page very good, WE LOVE SKA ans ALL YOU NEED IS SKA a radio program from Bologna too, they are my favourite ska pages.

What's going to be coming up in terms of gigs or any other projects? Is there a new CD coming out?

Now  we are in the middle opf ADELANTE TOUR 2018, for our 10 Years, but we are working to a new project, and we are very happy and excitited for this work in progress, a new album.

When is it going to be out and what should we be expecting?

I think in autumn 2019 but i'm supposing it, sure you have to expect a bomb reasty for explode.

A bit of space for your own comments and anything else you want to add!!!...

Thanks to you to give us this space, and to all the people who will arrive to this question whitout sleep!!! LET'S ALWAYS  SKA!
___