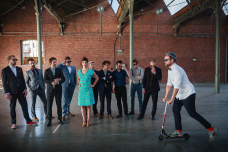 Members and the instruments they play:

Year band formed: 4 years with vocals, before 11+ years as an instrumental ska band

Everybody watches no one knows 2013

How did you come up with your band name? Does it have a background?

That happened 15 years ago, we thought it was a cool name I think. We brew our own music.

How would you specify your style as a ska band?

Which song would you suggest someone to listen to in order to get to know your music best?

Which ska band/personality influenced you the most?

We started as an instrumental band, so the skatalites where a big influence. But there where also some local bands we saw live like the dill brothers, who gave us inspiration to start a band. Now we all like the old Jamaican records and the new soul from daptone records.

Apart from ska, what music style influenced you the most?

That must be soul, reggae and jazz.

What message are you trying to get across to people with your music?

Does ska have a political meaning for you, and if so what is it?

We’re not really in to politics.

What were the best and worst venues you've played?

The best would be AB Brussel with the specials and our latest CD release at „De Kuub” where we had more than 600 fans who came for us, the worst would be in a squat in Brussels where even a punk dude destroyed my trumpet.

How would you describe your audience?

Mixed, we have all ages at our shows. There are ska/reggae/normal.

Which song do you usually play as an encore?

We play spacial facial most of the times as an encore, we let the crowd go down and then the crowd goes wild: Song

Have you got any weird touring experiences worth a mention?

Last year when we were in London for a gig and our bass player got a phone call from his girlfriend that her water broke and their baby was coming sooner then expected. So he drove back and  even arrived in time for the birth. In the mean time an other bass player drove to London to replace him. Unfortunately he didn’t know the songs well, so it was not our best gig, but we could play.

Which band would you most like to play with?

As a horns player I was lucky I already played with a lot of „stars” like Bitty McLean, Heptones and a lot of big festivals. Most of our Idols already died, but if we could make the death alive, I would pick Desmond Dekker.

I've always been interested to know how you deal with Nazi-Skins at your gigs.

We never had explicit nazi skins at our shows. I think we’re a little bit too rootsy to attract those people.

There's a lot of talk about 3 ska waves. How far can you identify yourselves with those? What do you think is going to come after the 3rd wave? What's the future of ska?

We’re defenetly the most influence by first now. When we where teenagers we really into ska punk and two tone as well.

Why do you think it is that most young bands either play traditional ska or ska-punk?

Traditional is the roots, and that will stay. In Belgium I only know smooth lee as a ska-punk band.

Why do you think it's so difficult for ska to establish itself? Do you think ska is doomed to continue to play a minor role in the music scene?

For the moment, yes unfortunately.

Which band or ska CD do you recommend (apart from your own) to the people out there?

Who, in your eyes is the "Godfather of Ska"?

Which ska site do you particularly recommend? What are your favourites?

In Belgium we have a site for Jamaican/Caribbean style music: reggae.be

What's going to be coming up in terms of gigs or any other projects? Is there a new CD coming out?

We have a new E.P. coming up. 2 songs on a single vinyl with 2 extra digital tracks.

When is it going to be out and what should we be expecting?

We keep on spreading good vibes and let people dance

A bit of space for your own comments and anything else you want to add!!!...

Thank you very much for having interest in our band!