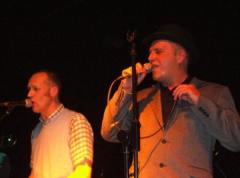 How did you come up with your band name? Does it have a background?
We are named after an old Warner Bros movie called The G Men, which was released in 1935.
How would you specify your style as a ska band?
Ska pop with hints of 2 Tone.
Which song would you suggest someone to listen to in order to get to know your music best?
Freedom Train.
Which ska band/personality influenced you the most?
The 2 Tone movement.
Apart from ska, what music style influenced you the most?
Reggae and a dash of Northern Soul.
What message are you trying to get across to people with your music?
Enjoy yourselves!
Does ska have a political meaning for you, and if so what is it?
Ska has always encouraged unity, which is something that The G Men agree with.
Concerts
How would you describe your audience?
A mixture of skins, football casuals, original punks and Tennis fans.
Which song do you usually play as an encore?
Madness.
Have you got any weird touring experiences worth a mention?
The whole band sleepwalks, and we often meet ourselves in hotel receptions during the night.
Which band would you most like to play with?
We have performed with many UK and Jamaican ska stars over the years, but it would be nice to support Madness one day.
I've always been interested to know how you deal with Nazi-Skins at your gigs.
We don't attract any Nazi Skins at our gigs.
Ska History

There's a lot of talk about 3 ska waves. How far can you identify yourselves with those? What do you think is going to come after the 3rd wave? What's the future of ska?
We started during the Third Wave of British Ska (1989), but when that bubble burst, we kept on performing because we enjoy it. Ska music will always be here, but I doubt it will ever be as big as it was during the 2 Tone days.
Why do you think it is that most young bands either play traditional ska or ska-punk?
Probably because they have never listened to Bad Manners!
Why do you think it's so difficult for ska to establish itself? Do you think ska is doomed to continue to play a minor role in the music scene?
Millions of people love ska, but they only want to hear or dance to the old hits by the famous bands and solo artistes. There is so much talent, especially in Deutschland and the UK, but most people just want to listen to 2 Tone or Blue Beat most of the time.
General

Which band or ska CD do you recommend (apart from your own) to the people out there?
Here Today Gone Tomorrow: Too Many Crooks.
Who, in your eyes is the "Godfather of Ska"?
Laurel Aitken.
Which ska site do you particularly recommend? What are your favourites?
www.ska-talk.com  and www.dothedog.com
What's going to be coming up in terms of gigs or any other projects? Is there a new CD coming out?
We will be performing at the Feuerwerks Festival at The Reduit in Mainz Kastel on Monday, 25th June, and we also have a couple of shows lined up in England. We are also recording some new tunes, and have record label interest.
A bit of space for your own comments and anything else you want to add!!!...
Hello Deutschland. Please come and see The G Men play in Mainz! Kind regards, Dell.