Short interview at the "Freedom Sounds Festival" in cologne (3.5.2014) 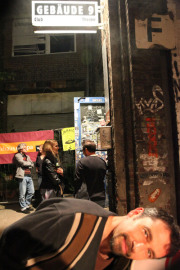 DerDUDE: What’s your impression of the festival?

Brad: I think it’s fantastic. I really enjoy it. Everybody is really nice, receptive and very much into it. There’s great camaraderie among the bands. It’s been really worthwhile and I’m happy to be here. I really appreciate Peter inviting me to come here. It was a spur, we just said: OK, let’s do this!

DerDUDE: What is your impression of the audience here?

Brad: The audience is great. I had not been to Germany in 29 years. I had heard and read about the German and the European Ska scene – but to actually experience it has been great. People are really nice and positive – it’s great crowd!

DerDUDE: What do you think about the bands and their performances over the last two days?

Brad: Oh well… I can truly say that everybody has been really good. There was not a single bad set. And again, the audience has been very supportive, whether it was just one guy and his acoustic guitar or a big band with eight guys blowing horns. The energy is just fantastic and people show a great attitude.

DerDUDE: I think the Trojans were really special…

Brad: I had not seen them in along, long time but I thought they were great. Bim Skala Bim really impressed me. I had not seen them since the mid 80s, so seeing them was just great. And tonight it has all been great right from the get-go. Like Tommy Tornado and Mr T-Bone who I had only heard on records, because they don’t come to Minneapolis very often.

DerDUDE: You are here in Germany because of your film, Legends Of Ska. What kind of reactions did you get?

Brad: It’s been very positive. I got the impression that I could use more subtitles because it’s a lot of information, not just a concert film. It’s about a time in Jamaica in the early 60s, not just the concert in Toronto we filmed. You may have heard about these people and you know their songs, but now you suddenly get to meet and talk to them. I think it is one of the films people will watch a number of times because every time you will perceive different things at different times. The questions that were asked after the screenings were really good. 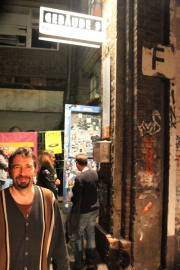 DerDUDE: What is the next step for the film?

Brad: This is something like a pre-release spring tour. I am still applying to a number of film festivals, all over the place. The traditional thing to do is you show your film at different festivals and find a distributor or an agent to run with it. However, the whole film business has become ever so competitive. Everybody is making films and people’s attention span is short. You can watch films everywhere, on your computer or your home screen, so even Hollywood finds it hard to get audiences into movie theatres. It is difficult to get somebody to sit down for more than 6 to 12 minutes to focus on one subject. That is why my strategy is to play on the passion of the real Ska fans. A lot of people still think that Ska started with The English Beat and The Specials.

DerDUDE: Why does your film concentrate on just one or two years?

Brad: I tried to focus on the really early years. There was the Rocksteady movie a few years ago and there have been many different Reggae movies over the years and over a dozen Bob Marley films. Somebody even did a Dub movie. That is why I focussed on the early 1960s – the time the other films have not covered. Also, I did not want to include too much.

A guy in Australia made a film about Duke Vin, the collector who live in England for a long time and passed away recently. His film has one star, but he talked to many people about him. I had so many stars in the film. I could have called in just one or two and made a movie just about them. But I tried to make this whole, big historical document on the early, original Ska days.

DerDUDE: Thx, Brad, for the interview.